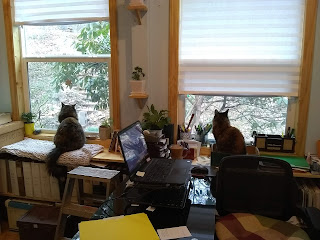 Two kitties at the windows in the new office. I put a bird feeder outside the window and it keeps the cats busy for hours. 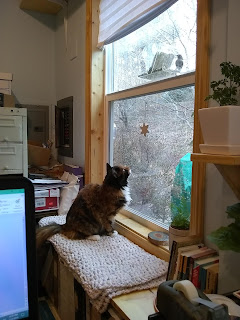 Mallory likes to play whack-a-mole with the birds that come to the window feeder. The birds have learned that she can't get to them. 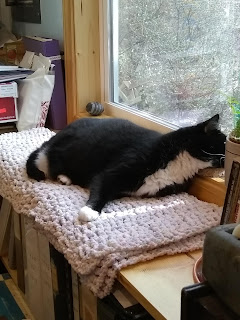 Watching the squirrel can be so exhausting! Rascal had to lie down, but is keeping an eye on him. 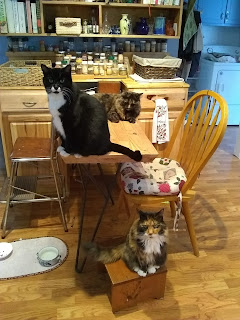 Must be dinner time, because we are all here!
Posted by Alice Sabo at 11:05 AM No comments:

If suspense is your cup of tea, give this a try for 99c. Discounted through March 16th.

The Unintended Consequences ebook is available all over. Click HERE to pick a retailer.
Posted by Alice Sabo at 12:23 PM No comments:

End of the Reading Slump

I finally picked up a book again. I don't know what causes my reading slumps, but they occur from time to time. I don't think I've read a book for months. And I have a pile waiting on the Kindle, so it isn't for a lack of material.

I started with a book that I've been meaning to read for awhile. Unfortunately, I was underwhelmed. I finished it, mostly just to see where it was going. There wasn't enough conflict. The characters enter difficult situations and the problems unravel much too easily. But I was curious enough about where it was heading, so I got book 2, which was a mistake.

Along with a lack of conflict, book 2 veers off into romance. There was much too much pining for my taste. And a total clash with the straight up epic fantasy of the first book. Needless to say, I will not be reading book 3.

The main problem here is the contradiction of reader expectations. When I pick up a book billed as epic fantasy, I'm looking for certain things like good world building, non-human species, maybe some magic, a journey, possibly a quest. I think most readers would agree that subsequent books in the series should remain consistent in those elements. A little romance thrown in as a subplot is fine as long as it doesn't hijack the story.

Mashing genres together can be fun. I like Alex Bledsoe's Eddie LaCrosse series that is medieval noir. He's a sword-toting gumshoe on horseback. But that's in the blurb and I was ready for it. It also remains consistent book to book.

There's lots of fantasy-romance in all the subgenres. That just isn't my cup of tea. Neither are military sci-fi or zombie books. It's not even apples and oranges, because they're both fruit and really can be substituted one for the other. It's more like apples and octopus. Some people love it, some don't. So don't offer them an apple and then serve up octopus.
Posted by Alice Sabo at 1:11 PM No comments: