When I finished Dark Deeds, I though I was saying good bye to the series. I had left Asher in a good place. It was time to move on to other things. But I forgot how much fun his story is to write.

I'm finally settling into a rhythm of writing, and I've discovered that I like to hop into different series. It helps me change gears and keep everything fresh. Starting in March, I will have four series in rotation now. However, I don't think I can produce four books a year. I'm set up for three this year, if I can learn to write faster, I'll try for four next year.

I struggled with two books last year which completely threw me off my stride. I don't think I scheduled in enough time for life-in-general. This time I have set up a whole year of writing with lots of wiggle room for anything that comes down the pike. And so far, I am a little ahead of myself, which is just amazing.

So Asher is off on another adventure. I'm only a couple thousand words into the draft and already I'm having a blast.

If all goes according to plan, it will be out in August.

Last Chance to Get Lethal Seasons for 99c

Tomorrow Lethal Seasons - book 1 of A Changed World - will go back to normal price. Grab your copy for 99 cents now. Click here for a list of retailers.

Lessons Learned - book 4 of A Changed World - is now available at all retailers. Click here to find your favorite.

The next book coming out will be a high fantasy stand alone. I've got the release planned for late March unless something goes sideways. The toughest part is coming up - writing the blurb. This book was supposed to come out last year, but it had some issues. It's taken me awhile to find the proper ending. Now that I have that, I can push on the the next stage.

While that one is out to readers, I will be drafting the next Asher Blaine mystery. I had actually planned to go back to the Transmutation series, but Asher whispered in my ear that there was another murder about to happen. That book will possibly be out this fall.

Keep an eye on the blog or website for updates.
Posted by Alice Sabo at 1:15 PM No comments: 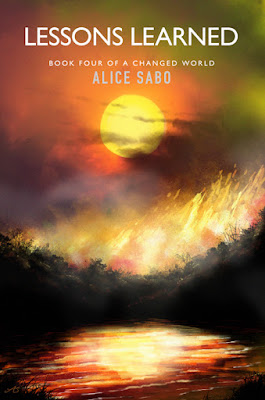 Another wonderful cover from Alex Storer for book 4 of A Changed World.

Lessons Learned is now up for preorder at various retailers. You can check your favorite here. It will be on sale all over on January 18th.

If you haven't started the series yet, book 1 - Lethal Seasons - is only 99c until the 18th. See the list of retailers here.
Posted by Alice Sabo at 7:25 AM No comments:

Lethal Seasons is currently on sale for $0.99 on all retailers. Visit my website for a list of them. Click here. It will be discounted thru to the 18th when book 4 comes out. Then it will go back to the regular price.

Book 2, Scattered Seeds, will be loaded into the new retailers today and should be available all over by this weekend. I will load links into the website as soon it goes live on the other sites.

Book 3, Gleanings, will be loaded into the new retailers next week and should be available all over by next weekend.

Book 4, Lessons Learned, will be released on the 18th. It should be available all over at that time. I've got a cover reveal here on the blog on the 11th, and it will be available for pre-sales at that time. So come on back to get a peek at the latest wonderful cover from Alex Storer.