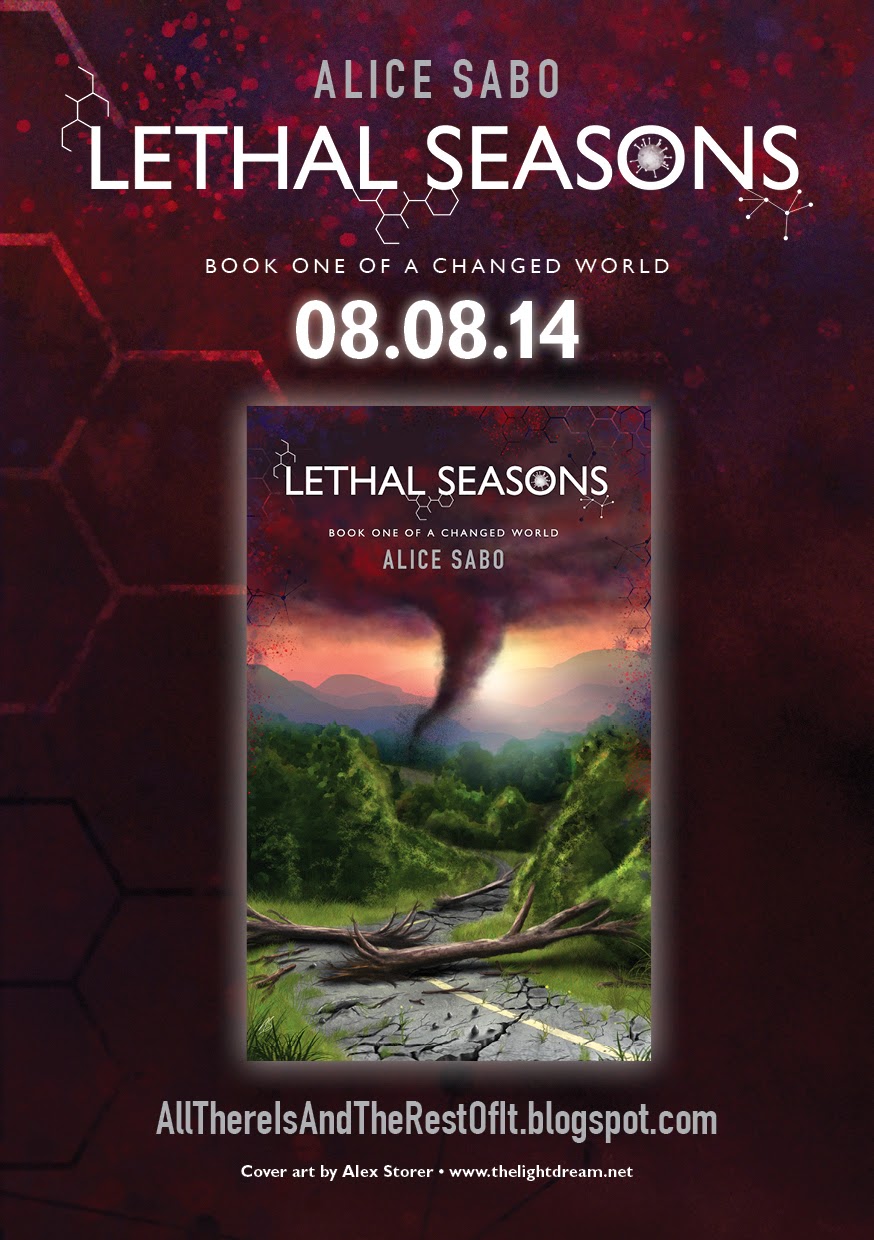 First of all, here's a wonderful flyer that Alex made for me.

The Goodreads Giveaway ended. I think it was very successful for getting the word out - 913 people signed up for it and 453 people put it in their "to be read" file. I am expecting the first proof of the print book next week. I hope to have copies in hand, to mail to the winners, in another week or so.

And as promised, here is an excerpt from Lethal Seasons:

Wisp could sense the person waiting for him. It was a girl, and she was frightened. Her fear tasted sharp and too long held. She was worn down with the burden of it. He paused in the darkened corridor of his home and pushed his senses out into the surrounding woods. There was no one else in the vicinity of the old factory where he had lived for the past three years. The aging site had been a derelict long before the virus hunted his kind. Thick brick walls and steel beams still stood against the ravages of the weather. But it was the cellars and sub-cellars that he called home.


He continued upstairs to ground level. Twilight softened the harsh angles of debris in the yard. Old pallets and piles of stone, a tumble of bricks where a retaining wall had given way, cans and broken glass and the skeletons of weeds made a labyrinth of unsteady steps to his door. The girl waited where she was told, in the potholed remains of a parking lot. Hulking stacks of crumbling sidewalks took up much of the cracked asphalt. It held a certain symbolism for him. Someone had ripped up the sidewalks and piled them here, perhaps to be recycled. But to him it said that pedestrian traffic was no longer possible in this area. He held it as a totem, hoping it would ensure his solitude.


She was small. Not more than ten or twelve years old. A mental shiver wracked her as she stood alone in the fading light waiting for a meeting with a monster. Wisp regretted the charade, but fear was often his only weapon.


“I am here,” he said stepping into her line of sight.


She jumped. A gasp, cut off, shuddered into a whimper. “Are you the finder?”


“Can you find my brother?”


Her fear was suddenly drowned with loss, with desperation and hopelessness. He could taste the ashes of her grief, the spiky pain of regret. “I have nothing.”


She was a refugee, a fugitive. Her pain was something he understood. This close he could smell her unwashed body. A child, hungry and alone and knowing there was no solace. She trembled with exhaustion. He knew he couldn't refuse her.


She cried then, the relief so great. It pushed back on her burden of grief, and eased his own pain. She swallowed the tears away, stronger than her years. “What should I do?”


Wisp looked up at the clouds scudding in from the west. A storm was approaching. He smelled rain on the rising wind. The child needed food and rest. They couldn't start out until the morning. “Come.” He reached out a hand to her. “We will prepare.”


Her steps were heavy, the fear rising up. In the half-light, he wondered how much she could see. What startled her the most? His thick white hair falling loose below his shoulders, eyes so pale a blue they were almost white, or was it the tattoo down his neck that marked him as not human? As she touched his hand, he had his answer: just a man. She registered his calloused hands and muscled arms. He was a big, strong stranger, and she feared all the things that could come from that.


“Lily. I'm Lily,” she spoke in a bruised whisper heavy with tears.


She looked up at him in the growing shadows. “Is that your name?”


He bit off his response. My kind have no names. She was too young to know that story. “It will do,” he said gently. “Come. I have food and water.”