Say It Three Times and It's Yours 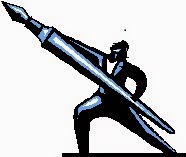 I had a Spanish teacher in high school who used to say that. Unfortunately, it didn't work for me. My Spanish is horrendous. However, it does work in writing.

Recently I learned, again, that you need to reiterate things for the reader to absorb them. I described my character twice and still got complaints that readers didn't know what he looked like. So obviously I didn't do it well enough, or often enough for it to stick in the reader's brain.

Tagging the description of an attribute to a character seems to help.

His dark hair was tousled from sleep.
His blue eyes flashed with anger.
He lifted a beefy shoulder in a casual shrug.

My unusual looking character didn't get the same complaint. I mention the color of his eyes - pale blue - and his hair - white - repeatedly. Mostly out of the other characters' reactions to him, because he is an unknown quantity in the story.

It's hard to remember to describe characters because I know what they look like. And when I am laying down the bones of the story, plot takes priority. When I go back to fill in description, tone and world-building sometimes take priority. Then I forget to describe the characters.

Being a list-maker, I have a checklist for editing. Character description is on there. As is anything else that's important to the story. In Lethal Seasons the weather is important, so I made sure to mention it regularly.

Guess I need to pay better attention to my checklists.

Lethal Seasons will be going on sale later this month. Sign up for my newsletter to hear about sale dates and news of upcoming books.