I just finished reading The Winter King by Bernard Cornwell and I need to chew on it for awhile. It is a well loved book by most readers and I am curious about what appeals to them.

This is a well researched book with too many battles for my taste. I guess that is one of the things that will appeal to other people. The world at that time, post-Roman Britain, is brutal and Cornwall describes it in painful detail.

World building is important for a fantasy book. I will say that his is extremely well done. The people are coarse, ignorant and superstitious. The politics are conniving and cruel. All in all, a world too dark for me to enjoy reading about.

This felt like more of a historical treatise than a novel. In that, I think my father would have enjoyed this book.

The things that poked at me, aside from the casual brutality of the time, were the thin characters. Everyone had one overriding characteristic that beats a monotonous drum. Perhaps because there are so many characters in the story, none of them can really expand or grow. None of them last long, because of the constant warring. Also the simplistic depiction of their Druids, hopping on one foot, throwing pebbles and spitting to curse or bless something. I felt that the author thought them foolish and held a certain contempt for all the religions presented.

I have to admit that I skimmed through the pages and pages of warriors hacking each other to pieces, the rapes and looting. It made me wonder how there are any of us left alive. And it made me realize that we have been fighting over land since the beginning of time. Both the Franks and the Saxons, in the novel, are killing off rivals for farmland and bringing in their own people in to settle those stolen parcels of land.

I prefer a character driven story. The narrator, Derfel, is barely visible in some scenes as he describes the action. He is the right-time, right-place kind of character that gets to see and hear everything of importance. But I hardly know him, other than he's good with a spear and will fight to death for his companions.

This is supposed to be a more historically correct account which tosses in some names I know in an completely different order. That sent my brain scrambling to try to sort out who was who and how they had been portrayed in other stories. I think that confused me enough to make me a little defensive while I read. Plus, the most disappointing part of all--no magic.

I won't be reading the rest of the series. As a historical writer, he's very skilled, but this story just doesn't appeal to me.

Posted by Alice Sabo at 8:56 AM No comments: 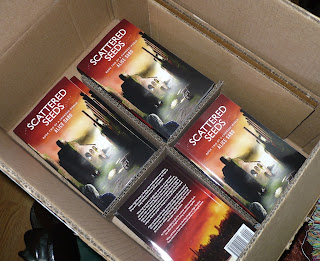 All the books for the Goodreads Giveaway are in the mail! 10 lucky winners will be receiving a print copy of Scattered Seeds.

I set up the giveaway automatically because it's on my marketing list. But then I had second thoughts. Each time I do a giveaway, I seem to be getting less reviews. I upped the number of books to try for more favorable averages, but it doesn't seem to be helping.

This giveaway had the least amount of people sign up for it - 514. That might be because it is a sequel. But I have noticed a down trend in people requesting my books. On the bright side, 219 people put it into their To-Be-Read pile. So that's a good thing, but that number is lower than the others also.

I guess it's time to investigate a few more avenues for getting the word out about my books.
Posted by Alice Sabo at 1:21 PM No comments:

The Story Changed Itself

My work in progress is coming along nicely, but it isn't the story I thought I was writing.

This story has been around for a long time. Rewriting it was not going to fix it, so I took one plot line and did a very simple outline for it. As I wrote, the plot shifted. It's still heading in the direction I wanted it to, but I'm going to arrive from a different starting point.

All of the previous writing I did has been invaluable. I know the galaxy and the politics of the different planets. I have backstories on all of the characters. I know them intimately. But this time around they are surprising me. I'm letting them run.

Instead of info dumping, I am building the information into the story. It's a lot of fun. And it is so much more organic to the growth of the world. It's a big world and there is a lot to know about it. But tossing all that information at the reader is overwhelming and at this point, useless.

The world grows as the characters move through it. There are 20 planets in my world. But not all of them are involved in the beginning of the story. It's like writing a novel based in Bangor, Maine, but spending time talking about the other 49 states. The reader doesn't need to know any of that right away, or maybe at all.

In one of the previous versions, one of my beta readers said she couldn't keep track of the places and people. I know I had way too many characters, but I couldn't understand why the places were confusing. Partly I think it's because I made it too complicated. Every stopover had an incident, politics and new species. Those things might have enriched the world, but they didn't move the plot forward. I was heaping whipped cream and fudge sauce on top of a tiny sliver of ice cream. The window dressing took over.

As I write out the bare bones for this story I am enjoying the new freedom my characters have. They are acting like people now that I have removed the strictures of the previous plot requirements. And some new skills I've picked up in the last few novels are helping make it into a much more interesting story.
Posted by Alice Sabo at 1:30 PM No comments: