Smashwords Sale and Other Things

Smashwords is having its Summer/Winter sale (depending on your hemisphere). A bunch of ebooks are on discount, including all of mine. Click HERE to see my books, and HERE  for the main page. You need to scroll down to see the discounts. 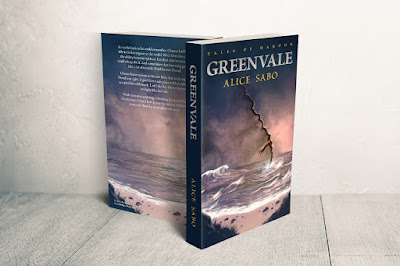 Greenvale is now available in print!

And in other news...

The audiobook for Lethal Seasons will get underway in another week or so. I'm very excited about starting that. I'll blog updates as I have them.

Alex is working on a very cool design for the print version of Facade. That will be coming out soon also. And I will do a lovely cover reveal as soon as it's available.

Book 3 of the Transmutation series is coming along well. I have an October release date penciled in. Hopefully, I can keep on track for that. No title as yet. Sometimes titles are easy to come up with and other times it comes right down to the wire. One book I worked on had at least 4 working titles and none of them ended up being the one I finally went with.

And now I need to get back to writing!
Posted by Alice Sabo at 1:10 PM No comments:

I have decided to try doing audiobooks again. I put up an audition for Lethal Seasons on ACX and got 12 responses by the end of the day. I have to say that felt good. It was probably due to the fact that I was willing to pay for the narrator and not do a royalty split.

I listened to them all very carefully. At first it seemed like it was going to be a tough call. Then I heard the perfect match. His pauses were in the right place. He emphasized the right words. In essence, he got my writing voice. Yay!

Since he's in the middle of another project, he'll start my book around the end of this month. I think that means that the audiobook might be on the market by mid-September. That seems a long time away, but it's a very time consuming project.

By the time that's out, Scattered Seeds should be in the works. And if that schedule holds, the audiobooks might be coming out once a month through January 2020. But that might be counting chickens before they're hatched. There's a lot of work involved and lots of possibilities for set backs.

So I am off on another adventure.

On the writing front, I am delving into book 3 for the Transmutation series. It's nice to get back into that world for awhile.

And that's it for today.

Posted by Alice Sabo at 9:08 AM No comments: