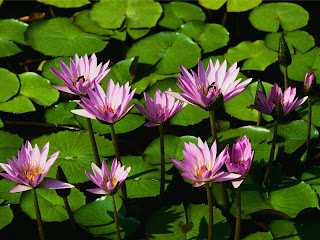 I chose a serene picture for this blog because the topic is a little zen.

I discovered, awhile back, the power of saying things out loud.

One day while doing some especially boring scene painting, I felt like I was going to explode. I think I was painting some steps, repetitious but still a little picky. Scene painting very often happens on stage. Due to scheduling the rehearsals and lighting work and such, scenic artists often have to work late hours. Overnights are common. So I was probably tired on top of it. And I just said it:

I don't want to do this.

And despite the fact that I did do it, probably several days of it, I felt a lot better. Some of that angst was expressed. I got it off my chest and was able to carry on.

It's a lesson I've paid attention to. There are always things we don't want to do, but have to. Once we become adults all sorts of nasty things have to be dealt with, like taxes and flat tires and clogged toilets. There is no law that says we can't state our feelings about it. Saying it aloud, even if no one heard me, helped. Maybe because I knew the work had to be done. It was promised. There was a deadline. That didn't mean I had to suffer in silence.

So the next time you're washing the floor or pulling weeds or going to the dentist, allow yourself to say it out loud - "I don't want to do it!" And see if it doesn't make it easier to get through the chore.