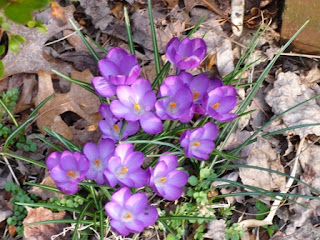 ...if we haven't had any winter? Most of my crocuses are already spent. Daffs are blooming and the hyacinths are sending up fat buds.

Now don't get me wrong, we've had the bitter cold day or two. But that's it. Temperatures have been downright balmy throughout December and January. I've been out working in the yard in my shirtsleeves!

And now the fruit farmers are worried about an early flowering. Our plum and apricot are getting ready to pop. If a late freeze gets them, we will be sorely disappointed - but it won't be the economic disaster that the local orchards might face.

I've got my fingers crossed that this will be the magic year that all the fruit trees produce good harvests. We haven't had a good apple harvest since I started pruning it. And the Bing cherry only had a handful of flowers last year which delivered exactly 2 cherries. The Montmorency really struggled with some scale and only produced enough for a crumble. We lost all the apricots to a hail storm that followed a late frost. And the new plum tree delivered 1 perfect plum.

Hopefully this lovely warm trend will continue. I've got my fingers crossed.
Posted by Alice Sabo at 12:15 PM