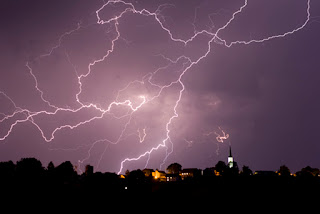 Storms and flooding, drought and fire, oh my.

When I lived in Grand Junction, CO, the old timers used to tell me how much the weather had changed. They blamed it on a variety of things - putting a highway through the canyon and the golf courses were the most common scapegoats.

The city had 4 golf courses, I think, and all that irrigated land was changing the desert. That area averages 8 inches of rain A YEAR. In case that doesn't mean anything to you, here in NC the average is 42 inches. Not a lot of rain. It's high desert, very dry.

When I moved there they told me the average high temps were in the low 90s. And that's a dry heat, so it feels cooler. That summer we had 5 weeks in a row over 100 degrees. When you bake stone that long, it doesn't cool down much at night. Most houses only had swamp coolers. And they only cool the air to about 10 degrees below the ambient temp. After work I hung out in the frozen food aisle of the supermarket until my body temperature came down. Then I would go home and take cold baths.

They were going into the 5th year of a drought while I was there. I don't think that has eased.

When I moved to NC, I heard similar stories. "This isn't a normal year," they said. Too hot, too cold, too wet, too dry. One year I lost plants to drought and the next year to flood.

Climatologists say it isn't changing soon. I think we all need to learn some new skills. And maybe put in a storm cellar.