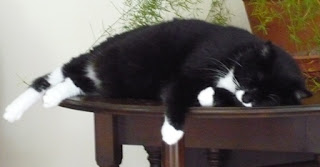 I have said a couple of times that something is outside of my comfort zone. And I thought I should take a look at what that means.

First, I want the  protagonist to be a good guy. He doesn't have to be Dudley Doright, but he does have to have redeeming qualities. I know I have a very soft spot for the pirate with the golden heart - like Han Solo. You think he's just a self-serving SOB until he saves the puppy. And you want him to be rewarded for saving that puppy. Lately, I've seen a lot of dark fantasy that has really unlikeable protagonists. That just doesn't appeal to me.

Second, he has to grow, or change, or achieve something. I've read a couple of stories where the protagonist was just caught in the wrong place at the wrong time and just sort of witnessed everything happening. Well, maybe that's too real. I want to read about someone stronger, smarter and more cunning than me. And he needs to be the one to solved the mystery, kill the villain or save the damsel.

Third, I'm really tired of the evil economy world. The kind that is run by maniacal corporations that will destroy the kingdom, planet, universe (and apparently all their consumers) in the name of glorious profit.

Fourth, I'm not a star battle kind of girl. Massive battle scenes - in space or on planet - don't do anything for me. In fact, all that death and gore really creeps me out. But an ultimate battle, with the painful repercussions is OK, and sometimes is required.