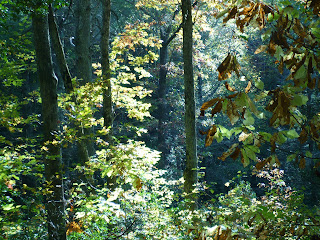 When I first started writing, I didn't think setting mattered that much. I had a few stories that were set in a city. Did it matter what city? I didn't think so. Somehow those stories never really worked out. I knew they weren't working and I just couldn't nail the reason.

Unintended Consequences was one of those stories. I admit that I've changed it a lot in its final incarnation, but the biggest change is setting. Once I anchored it somewhere, it started to work better. The setting crept into everything.

The story is sent in a fictional south Jersey town squeezed between the Pine Barrens and the salt marshes. The smell of the marshes, the damp salt air, a cold rainy October. All those things appeared as soon as I added real estate. There are a lot of Irish and Italians in that area. Suddenly I had a pizzeria with all the aromas of oregano and garlic, cannolis and strong black coffee.

Another story is a near future distopia. It was always sort of in NY City, but not really. Again, the story wasn't working. Part of that was because I had written it before I understood storytelling. The rambling adventures of various characters does not make a novel. But in trying to sort that out I realized I needed to deal with the setting.

To create the setting, I needed to take a look at my world. One of the criticisms I had gotten on a different story was that the technology I had mentioned was already outmoded. I'm not a techno geek, so that can't be an important part of my story. That means I need to build the world in other ways. I had to look at things that did make sense to me. What is the climate in the future? How has transportation changed? It's starting to come together and in building the world, I'm building the setting, and it is flavoring my characters.

So I finally understand how important setting is.