Too many crises makes a story dull 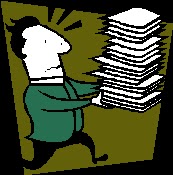 I just gave up on reading a book. I was about two thirds of the way through and couldn't put up with it any more. It wasn't a novel. It might have been a television show. The characters stumbled along falling into various misadventures and floundered their way out again, only to get back into trouble. That's not a story.

None of the characters had any goals beyond not wanting to be doing what they were presently doing. There were plenty of possibilities there. But I guess they never made it out of the author's head.

Each time a character got in trouble they trembled and shook and sobbed with fear and pain. Hmm. Aside from questioning whether the author understood the limits of the human body when it comes to pain, it made me dislike the characters. It might have been realistic for them to fail utterly in the face of overpowering odds, but that's not what I want to read. It can happen once, perhaps, as an epiphany. Then the character needs to get stronger and smarter and squeeze out of the next spot of trouble just in the nick of time. And using skills or information that they gleaned from the previous failure works even better.

That didn't happen. The bad guys were just egotistical sadists, not sure why, that seemed remarkably easy to dupe. And tolerant and rigid at the same time. Because they kept arresting the same people and letting them escape again. Hmm. Why not just shoot em?

Another thing that happened that really didn't work - the author had one of the protagonists (because I think there were 4) kill a child. Nope, not gonna help me like her. That's a scene that should have been the epiphany, or a major twist/reversal. The protagonist (M) is facing the bad guys who caught a bunch of them escaping. M turns into a puddle of quivering goo. She's scared, she's failed, she doesn't know what to do (again!). Bad guys give her an ultimatum - kill the child or we will. So she throws the little boy off the cliff and watches him fall to his death. Wow. All kinds of wrong there.

Every scene has the characters reacting to the most recent trouble. There's no planning, no direction, no tasks that need to be done. They just flail around in whatever arrives on their doorstep. So they are furious or terrified and almost always confused. There were a few scenes of flirting that were so out of place I skimmed them. But again they were blushing and giggling and generally over the top.

Now don't think I want scenes of laundry and cooking dinner. But where's the roller coaster? It doesn't work if it's all up with no downs. Some of those quieter scenes can anchor the world, which definitely needed some work. Or backstory, or maybe a hint of what these people want?