Most of the country is having a heat wave, so it isn't really news that it's hot. But it's beastly hot today and that means playing outside is a trial. The garden is wilty. I watered, but, ya know, it's hot.

However, the heat lovers are taking off. Peppers, tomatoes, cucumbers, melon, squash and beans are doing well. I'm picking the string beans and flat Italian beans every day now.

This is my first year for summer squash. I've never been a big fan of it. Seems nearly tasteless most of the time. But I like to give every vegetable a fair shake. And it's supposed to be very prolific.

Here's the first one of the season. 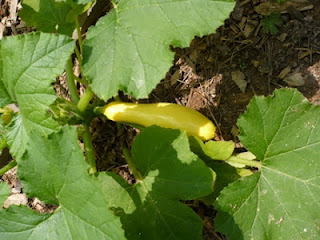 And here's a second one forming. 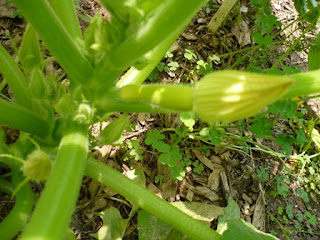 The chard is being very tolerant of the heat. Last year it really struggled. This year I put in an entire row and, of course, it took off. Not sure if fencing it against the rabbit had any effect.

I love the rainbow chard. It's fun to have so many different shades. And the stems keep their color when cooked. The young leaves are nice in salad. I usually saute the older leaves with beans or pumpkin seeds and season with a touch of vinegar and olive oil. Yummy.

This year I am being diligent in spraying the tomatoes with fungicide (an organic version from Gardens Alive.) And I am trying a new one - Hungarian Pink. It's supposed to be heart-shaped. 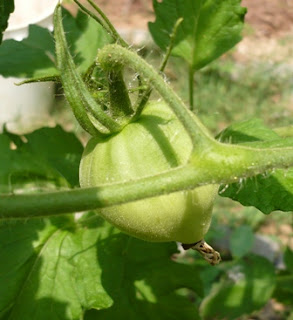 So far it is pointy at one end. I am eager to see what it'll look like ripe.

The strawberries had just flowered and were forming a 2nd round of berries, but I wonder if this heat will stall them.

It's predicted to be in the 90's all week. Hope everything survives!
Posted by Alice Sabo at 11:42 AM